Difficulty connecting to wireless Internet could cause issues in a user’s home or office. In this month’s Tech Talk, Steve Habben, Internet Technician at GRM Networks, discusses how to solve weak Wi-Fi connections by using Wi-Fi extenders.

Wi-Fi extenders are devices that connect to the user’s wireless router and help extend the Internet signal into rooms where the signal isn’t as strong. However, Habben cautions they may not always be the solution.

“Everyone wants a strong Wi-Fi signal,” says Habben, “but keep in mind adding Wi-Fi extenders is not always the best answer as some extenders will keep the Service Set Identifier (SSID) broadcast the same.” He says this causes more issues as devices can drop or bounce from the main router to the extender. (SSID broadcast is when the Wi-Fi access point tells a device it is available for connection. The SSID is found in the device’s list of Wi-Fi networks. The device will also attempt to connect to that network if it has previously established a connection.)

“Another issue is even if you name the SSID broadcast the same with ‘_EXT’ your device will have to switch connections to find the closest Wi-Fi,” he says. That does not always happen automatically. This is called a “sticky client” or when a wireless extender prevents a device from switching to a stronger Wi-Fi signal. 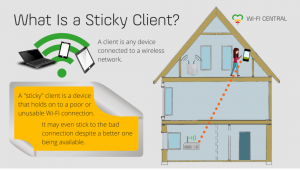 Graphic Source: https://eyesaas.com/sticky-clients/
“When this happens users may receive an error message stating Wi-Fi is connected but there is no Internet,” says Habben. “Although it can be cumbersome to track, users occasionally need to check or switch Wi-Fi connections to ensure they are connected to the strongest Wi-Fi signal.”